Study abroad experience in Germany brings an unexpected opportunity
Megan Luedke takes part in a news conference to unveil the mission patch for German astronaut Alexander Gerst, left. Second from left is another student from the class, along with a class assistant and her professor, right. / Contributed photo

Like most students who study abroad, Megan Luedke treasures her memories of taking classes in another country.

The University of Wisconsin-Stout student had more than a valuable international education experience, however. She had an out-of-this-world experience — helping design the mission patch for a German astronaut who in early June rocketed into space from Kazakhstan with two crew members and docked at the International Space Station.

Luedke, who will be starting her final year this fall, watched livestream broadcasts of the mission, rising at 6:30 a.m. in Menomonie to see the culmination of a project she was part of during the 2016-17 academic year at Hochschule Darmstadt University of Applied Sciences in Darmstadt, Germany.

“It was very cool to be part of something so meaningful in Germany,” Luedke said.

Luedke, of Manawa in central Wisconsin, is majoring in graphic design and interactive media. She received a grant through UW-Stout’s participation in a $1 million German Academic Exchange Service program to help fund her studies at Hochschule Darmstadt.

She had no idea, however, that she’d end up helping with a German Space Agency and European Space Agency project. When she had to switch one of her classes because of the language barrier, she wound up with a professor who said the entire class would revolve around designing the mission patch for Alexander Gerst.

Each of the nine students in the class worked on a patch design, which was to represent the mission, named Horizons. The class included two other foreign students, one from Italy and one from Belgium. “We had a lot of discussions as a group about what we wanted to represent,” Luedke said.

They did months of research on various topics that could be reflected in the patch, such as Gerst’s background, previous missions and space travel in general. Luedke had 90 pages of documentation for her design, which revolved around Gerst and his helmet.

Their designs were sent to Gerst in February 2017. Based on his feedback, a final patch that incorporated elements of the students’ designs was created by the professor.

In the final design, an arching white line represents the Soyuz rocket’s path and Gerst’s helmet, along with lines that create a face and bird. “This is where I see the most influence from my designs, as well as the face,” Luedke said.

A blue horizon represents explorations of space and the ocean.

Students were told that their individual designs would be sent into space with Gerst and his crewmates, one Russian and one American.

The final design was presented in May 2017, and students were invited to visit the European Astronaut Center for the news conference, which was livestreamed and covered in national media. Students were interviewed by German media.

At the event, Luedke met and had her photo taken with Gerst, also known as Astro Alex and who is a celebrity in Germany. “Everyone in Germany knows who he is,” said Luedke, who noted that Germany has a small space program compared to the U.S.

Gerst will become commander of the space station during the six-month mission, the first German to do so.

The patch on Gerst’s right shoulder has commercial value and can be found on ESA merchandise. Commercial design and interactive media are the concentrations within Luedke’s major, and she is doing both. “An experience like this will really set me apart from my peers,” she said.

“It was a once-in-a-lifetime experience,” Luedke said. “That is one of the biggest reasons why I wanted to study abroad, to do something unique. Studying abroad can be a scary thing; you don’t know what you’re going to experience. But if I hadn’t I wouldn’t be able to say that my logo is in space.”

Several weeks after the mission reach the space station, Luedke returned to Europe for a two-week summer design class in the Netherlands, led by UW-Stout Associate Professor Robert Fraher. Luedke also is pursuing a minor in applied global languages.

Megan Luedke of UW-Stout was part of a graphic design class in Germany that created the mission patch, background, for German astronaut Alexander Gerst. 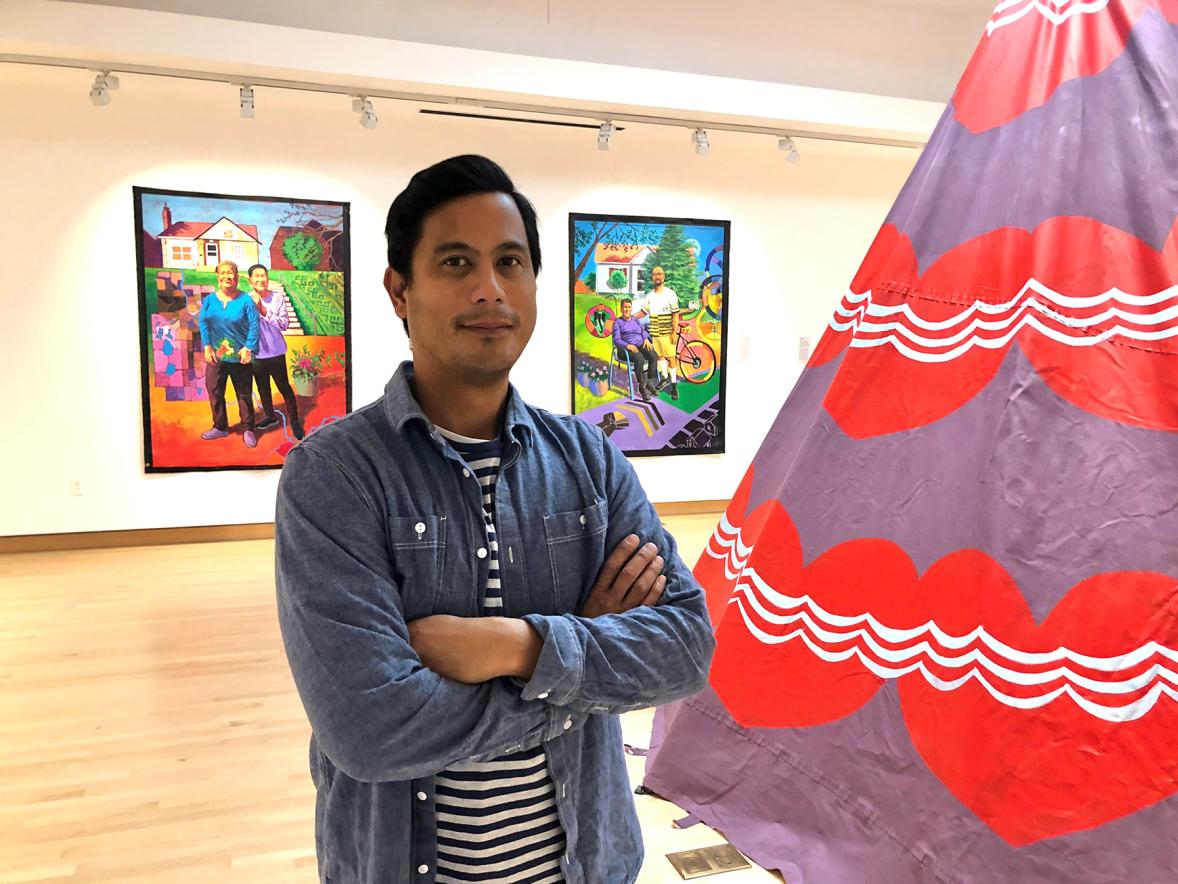 Furlong Gallery exhibit explores issues of how ‘to hold the land’

The word landholder and its derivative “to hold the land” would seem to have the same meaning, but to artist Witt Siasoco they conjure something very different.
November 15, 2021 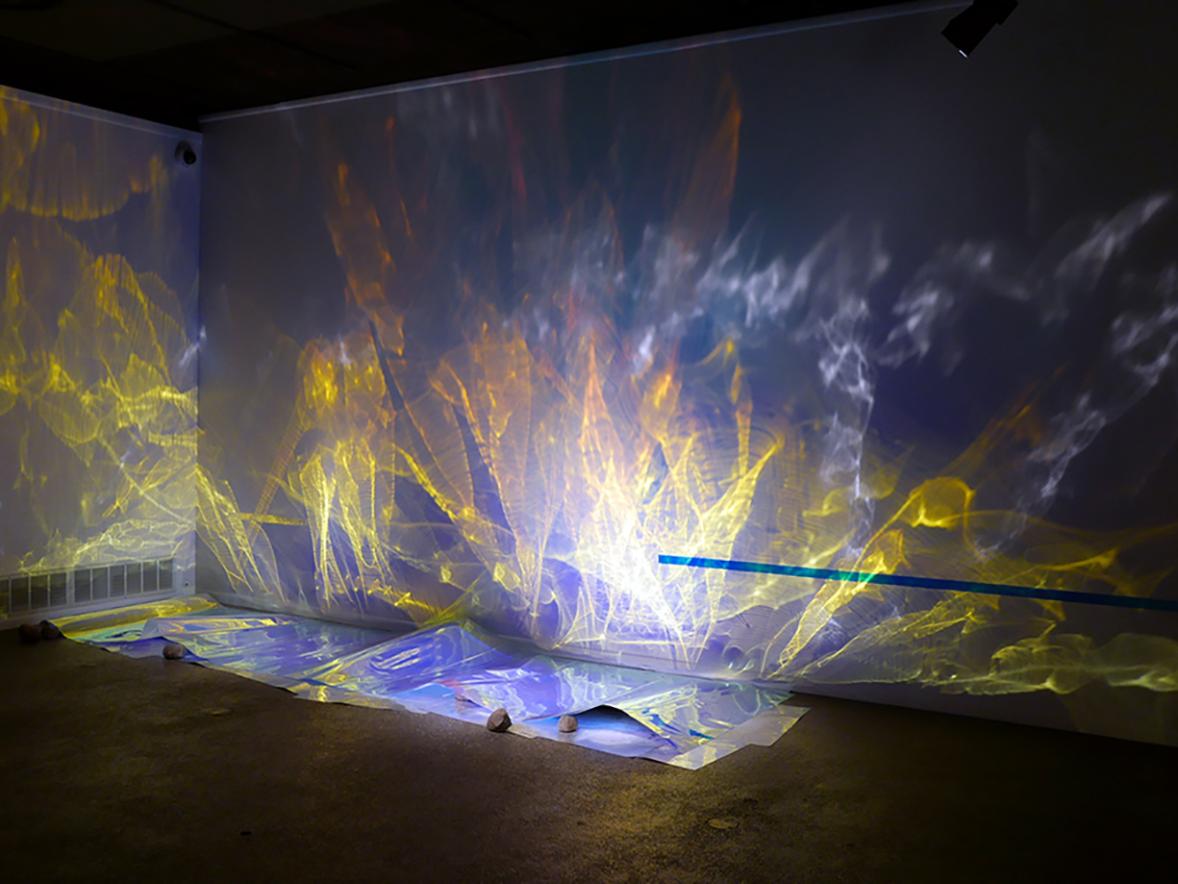 Using light and everyday objects to create a unique sensory experience, a UW-Stout professor hopes to inspire others to see new possibilities.
November 8, 2021 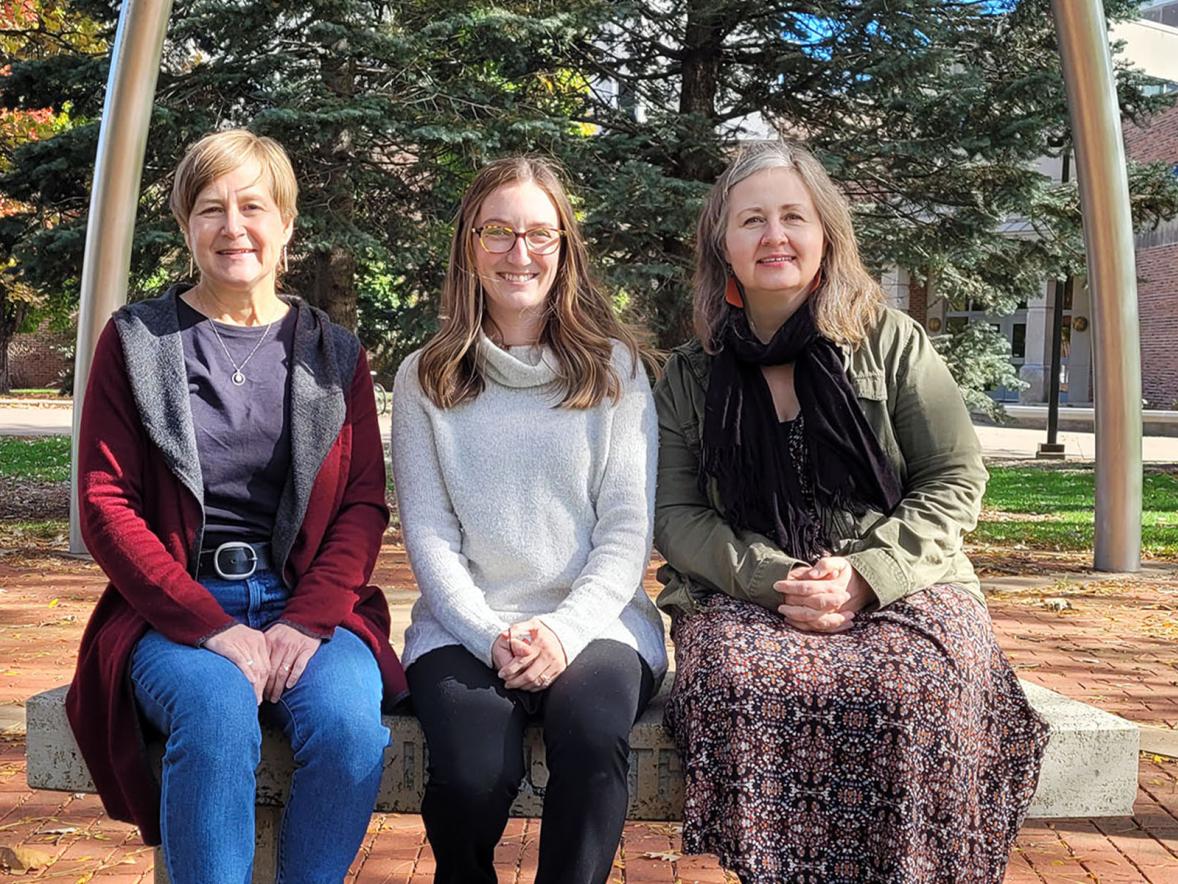 There’s good reason why buildings, from homes to work spaces to stores, should have healthy environments — humans are indoors about 90% of their lives.
October 25, 2021