A celebration of the campus and community including the official welcome of Katherine P. Frank to the institution.

UW-Stout will be celebrating the investiture of Katherine P. Frank
as the 8th Chancellor on Friday, October 14, 2022

Additional details and a schedule of events will be forthcoming.

Katherine P. Frank became the eighth chancellor of the University of Wisconsin-Stout, after a distinguished career as an administrator and faculty member.

From summer 2014 until spring 2016, she was Dean of the College of Arts and Sciences at Northern Kentucky University. Frank served as Dean of Humanities and Social Sciences at Indiana University East, Chair of English and Foreign Languages at Colorado State University-Pueblo, and a faculty member and administrator of programs involving student writing, faculty professional development, and student success.

Chancellor Frank, the first female leader of UW-Stout, grew up in Colorado and has a bachelor’s degree in English from Bates College, Lewiston, Maine. She has master’s and doctorate degrees in English from the University of Washington, Seattle. Frank’s research interests include Romantic and Victorian English Literature, rhetoric and composition, the scholarship of teaching, and academic leadership.

Porcelain mugs to be given to partners, guests at Chancellor Frank’s fall investiture
Continue Reading 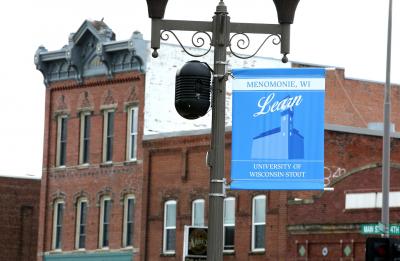 Smithsonian Magazine ranked Menomonie as one of the “20 Best Small Towns in America.”
Learn More

Stout's Leaders Through the Years